Thanks to the Andrew W. Mellon Foundation and the Federation of State Humanities Councils, we spent the past two years on the road around Kentucky examining the essential role that journalism and the humanities play in creating an informed citizenry.

Below are some of the Democracy & the Informed Citizen programs that occured around Kentucky. Some of the programs were recorded. You can listen to them by clicking on the links. 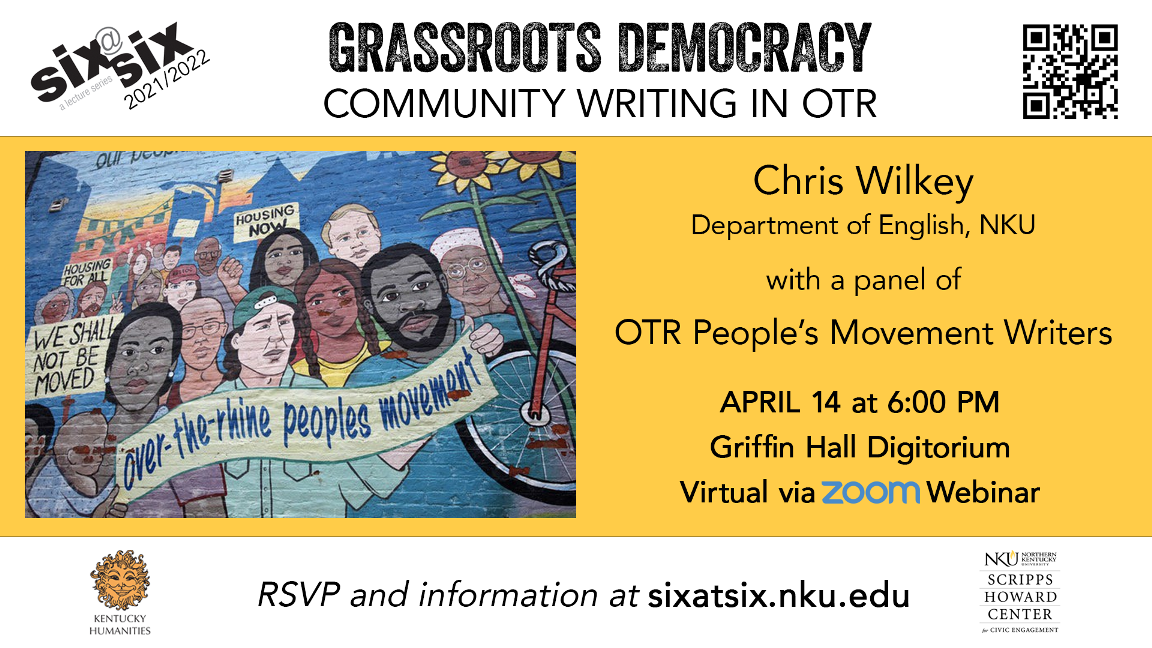 Cincinnati’s Over-the-Rhine neighborhood is organized with a rich history of grassroots activism embodying a vision of social justice for the future. Over the past fifty years, the Over-the-Rhine People’s Movement, an ensemble of loosely affiliated organizations based in social service, community education, the arts, welfare rights, and affordable housing development, have consistently addressed issues of racial equity and social justice as well as provided needed services for residents.

THIS EVENT HAS BEEN CANCELLED

The Self-Curated Life: Social Media and the Public Humanities by Julia Keller

Kentucky Humanities and the University of Louisville Department of Comparative Humaniites will host a presentation by Pulitzer Prize-winning writer, Julia Keller, called the Self-Curated Life: Social Media and the Public Humanities. This lecture is part of the Democracy and the Informed Series Initiative administered by the Federation of State Humanities Councils, with funding from the Andrew W. Mellon Foundation. The initiative seeks to deepen the public’s knowledge and appreciation of the vital connections between democracy, the humanities, journalism and an informed citizenry. 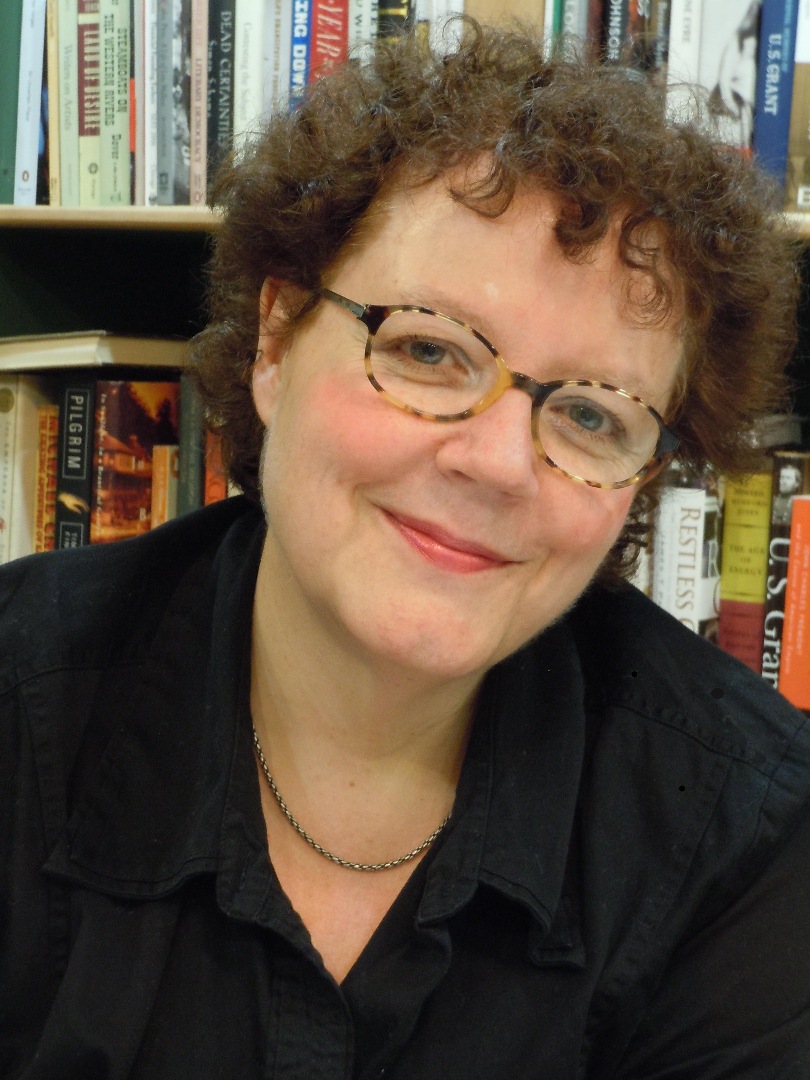 Julia Keller is a Pulitzer Prize-winning writer and longtime chief book critic at the Chicago Tribune. She has taught at Princeton University, the University of Chicago, and the University of Notre Dame, and was awarded a Nieman Fellowship at Harvard University. Julia earned her doctoral degree in English Literature from Ohio State University. After her journalism career, she embarked upon a series of novels set in her home state of West Virginia. The first book in what became an eight-book series, A Killing in the Hills, was named People magazine’s Book of the Week. She has also written a speculative fiction series, The Dark Intercept Trilogy, and Back Home, a novel for young adults, as well as a biography of Richard Jordan Gatling, inventor of the Gatling Gun: Mr. Gatling’s Terrible Marvel: The Gun that Changed Everything and the Misunderstood Genius Who Invented It. Her next book, Quitting: A Life Strategy / The Myth of Perseverance and How the New Science of Giving Up Can Set You Free, will be published in 2023.

Recording of the virtual event on February 8, 2022

Kim Johnson Flodin, based in Chicago, partners with other managers to drive standout cross-format spot and enterprise reporting in the AP's Central region. Included in her portfolio is managing the region's prize-winning photo staff.

Before taking on her current role, Flodin served for three years as news editor for Texas, Arkansas and Oklahoma. In that role, she worked with AP journalists throughout the three states to break news on the biggest stories of the day as well as produce deeply reported enterprise that set the news agenda. Coverage during that time included the funeral of George H.W. Bush, Hurricane Harvey and the 2018 elections.

Flodin previously was the Texas-Arkansas-Oklahoma news editor for photos for six years. Before joining the AP in 2000 as a photographer in the Los Angeles bureau, Flodin worked as a staff photographer at The Wichita Eagle in Kansas, The Times-Picayune in New Orleans and The Sacramento Bee, where she covered sports and news features in Asia and Europe, as well as northern California. She is a graduate of Santa Clara University and did post-graduate work at San Francisco State University.

Born and raised in the Washington, DC area, Andrew Harnik has worked as a newspaper and magazine photojournalist since 2003. He joined the Associated Press as a staff photographer in 2015. He has been recognized with awards from the Photos of the Year International and National Press Photographers Association's Best of Photojournalism competitions, as well as the White House News Photographers Association for the past 13 years in a row including the Political Photograph of the Year in 2012, and again in 2017, a top honor.

His work has taken him around the world with top U.S. diplomats and all over the country with Donald Trump, Hillary Clinton, and Joe Biden and many others in their race for president.

For many years Andrew's work was focused off Capitol Hill and away from the White House, telling stories of the nation's capital that are often overlooked. He believes that the stories of everyday people are as rewarding and important as covering high profile events and public figures. Andrew lives in downtown Washington, D.C. with his wife and their dog, Scout.

Julio Cortez is a Pulitzer Prize staff photographer for The Associated Press covering Baltimore. A graduate of Cal State University, Northridge, and a native of Mexico City, Julio began his career as a reporting stringer for the LA Times and LA Daily News out of high school.

While working his way through Cal State, Julio covered mostly high school and college sports for the Daily News. He participated in photography internships ranging from Spanish publications in Dallas and Ft. Lauderdale, Florida, a mid-size paper in West Texas and The Associated Press in Chicago. Upon graduation, Julio worked at the Scripps Treasure Coast Newspapers based with the Vero Beach Press Journal in Florida for 15 months then moved on to a three-year stint at the Houston Chronicle.

Julio’s career as an AP staff photojournalist started with an 8.5-year assignment covering New Jersey. The recent immigration developments at the U.S./Mexico Border, the Insurrection at the U.S. Capitol on Jan. 6, 2021, the first Impeachment trial of President Donald J. Trump, the Sandy Hook Elementary shooting, the Boston Marathon bombing terrorists manhunt and Superstorm Sandy are among notable news events he has photographed.

He photographed the London and Rio Summer Olympics, the Sochi and Pyeongchang Winter Olympics and the FIFA World Cup in Brazil, as well as numerous U.S. Open tennis tournaments, Super Bowls and golf tournaments.

Julio is a Part-107 FAA certified drone pilot which has allowed his work covering immigration at the border to be featured by many publications.

On the lighter side of things, Julio loves photographing the moon, and he has lined up the celestial body with many landmarks including the Statue of Liberty and Empire State Building.

More information coming soon. We are still working out the details of all the events.

Four photographers who spent years in and around the White House and national political campaigns will come together for a virtual discussion on Sept. 23 at 7 p.m. hosted by Transylvania University and Kentucky Humanities.

“Through the Lens: Campaign Photography in a Digital World” will examine the role visuals play in campaigns and whether digital imagery serves as a reliable source of information. The discussion includes award-winning photographers Sharon Farmer, Ryan Morris, Paul Morse and Chris Usher and will be moderated by local journalist and Transy Rambler adviser Jennifer Palumbo.

“Kentucky Humanities’ Democracy and the Informed Citizen initiative looks at the ‘shifting media landscape and how it affects our ability to access information, assess its credibility, and analyze its significance.’ This discussion will challenge audience members to understand the role visuals play in campaigns and whether digital imagery serves as a reliable source of information,” said Megan Moloney, Transylvania’s vice president for marketing and communications.

Bill Goodman, executive director of Kentucky Humanities, said, "As an adjunct journalism professor at Transylvania, I try to demonstrate to my class why journalism matters and how American journalism has historically responded to periods of political upheaval and social change. Journalism has always been there in a developing democracy to report the truth and base the truth on facts. This is what Democracy and the Informed Citizen is all about.”

The photographers participating in “Through the Lens” are also part “Fact/itious,” the first exhibition of the year in Transylvania’s Morlan Gallery. The exhibition will be hosted online from Sept. 8 to Oct. 9. They will also connect with Transylvania students and faculty virtually to discuss their careers and photography.

The 7 p.m. virtual event, which will be hosted on Transylvania’s website and YouTube channel, kicks off the university’s New Frontiers event series for 2020.

Democracy and the Informed Citizen is administered by the Federation of State Humanities Councils. The initiative seeks to deepen the public’s knowledge and appreciation of the vital connections between democracy, the humanities, journalism and an informed citizenry. The series, including “Through the Lens,” is also funded by the Andrew W. Mellon Foundation and the National Endowment for the Humanities.

For more information on this event, visit https://www.transy.edu/lens.